Getting ever so slightly sidetracked during a press conference to announce the construction of a real-life, modern day airport in Dhi Qar, southern Iraq, Finjan suggested spacecraft launched from the same area in 5,000 BC discovered Pluto and the mythical planet of Nibiru.

Sumerians inhabited what was Mesopotamia and, according to Finjan, were aided in developing this space station by visiting aliens.

“The first airport that was established on planet earth was in this place. It was constructed 5,000 years before Christ,”

“The particularity of this place is that it remains the safest for the landing and takeoff of aircraft, due to favourable weather conditions. When the Sumerians settled on this land, they were aware of this and have chosen specifically for their flights to other planets.”

An apparently well-read individual, Finjan is convinced he has found the proof for his theories.

“I invite those who doubt to read the book of the great Sumerian historian Zecharia Sitchin, or the books of Samuel Kramer including one entitled ‘History begins at sumer’ which speaks of the first airport constructed on planet earth, and it is there at el Naciria,”

During a visit to the Dhi Qar Governorate, Iraqi Transport Minister Kazem Finjan said that Dhi Qar was the venue of the first ever airport, built 5,000 years ago by the Sumerians.

Speaking at a news conference, Minister Finjan said that the Sumerian airport was used for space travel and helped the Sumerians discover the planet Nibiru.

The remarks, which were made on September 30, were broadcast on Nasiriya TV, and a shorter segment was aired by NRT TV.

Video by Path To Ascension

Tablets discovered in Ancient Babylon, found in modern day Iraq and thought to have been written between 350 and 50 BC, depict two intervals from when Jupiter first appears along the horizon, calculating the planet’s position at 60 and 120 days.

Dr. Mathieu Ossendrijver, a professor of ancient science from Berlin, says the texts contain geometrical calculations based on a trapezoid’s area and its “long” and “short” sides.

The Guardian reports that ‘the ancient astronomers also computed the time when Jupiter covers half of the 60-day distance by partitioning the trapezoid into two smaller ones of equal area’.

A fragment of one of the ancient tablets showing the geometric patterns. (Photo: Ossendrijver)

Ossendrijver believes European scholars in Oxford and Paris previously credited with developing such calculation in the 14th century were far behind their Babylonian colleagues:

These computations predate the use of similar techniques by medieval European scholars by at least 14 centuries.”

This impressive feat accomplished by Babylonian astronomers could just be the very tip of the iceberg.

Some believe that an entire human civilization, from around 10,500BC, has been completely lost to history. Moreover, scientists have recently uncovered evidence that could suggest there was once ancient life on Mars.

What else might these ancient civilizations have known about?

Watch a video of this report here:

Ancient, perhaps alien, real crystal skulls have an unsolved mystery associated with them…they have properties that seem to defy science and how they were even created would require a complete vacuum allegedly.

Archeological excavations have uncovered a variety of ancient crystal skull carvings, mostly attributed to the ancient Mayan civilization in Central America. They have a way of grabbing the human imagination, and have inspired many stoneworkers to create replicas, and are the subject of many popular works of fiction.

However, among the authenticated, ancient-carved crystal skulls that have been discovered, one stands out from the rest. It’s known by the Mayans as the Skull of Doom, and was used by their high priests to will the deaths of their enemies. 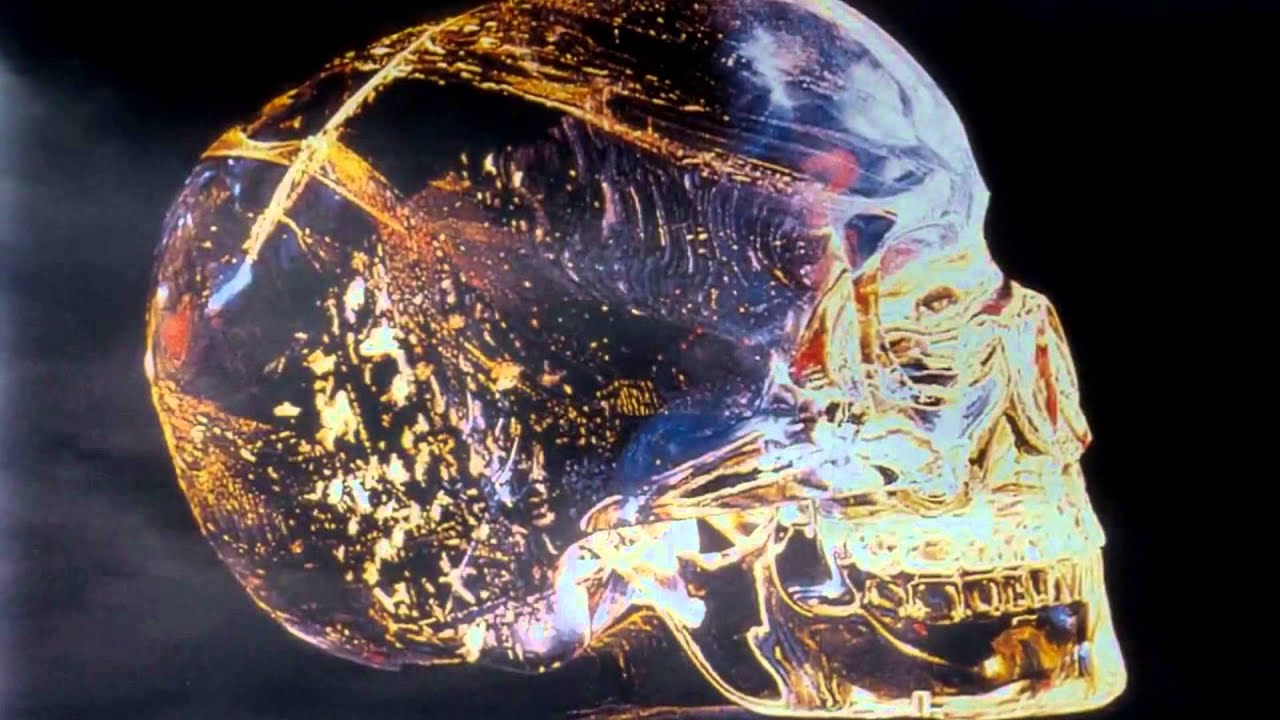 It was discovered at the site of a Mayan temple in Belize, by the famous explorer F.A. Mitchell-Hedges, and his teenage daughter Anna, who guarded it til her death at age 100. Strangely, it was found in two pieces since the jawbone is fully detachable, just like a real skull. It is also incredibly lifelike, with details so precise that it is identifiable as the skull of a female in her 20’s.

Analysis by experts including the Smithsonian Institute, National Geographic and Hewlett-Packard’s crystal laboratories, verified that both pieces were fashioned from a single crystal of quartz, with a highly unusual natural axis that could only have formed in outer space, or other zero gravity environment. Plus the mineral is so hard, it would have taken about 300 years of constant polishing with diamond dust to have shaped it.

They also noted the precise, natural placements of various prisms deep within the skull, that reflect light to and from the eyes, causing them to glow ominously from ambient light, and perhaps be able to see. Many have also reported hearing mysterious ringing sounds emanating from it, inexplicable changes of color, and even experiencing suddenly severe thirst while handling it.

Legend has it that this is the master skull in a set of thirteen, that began awakening humanity’s consciousness when the Mayan calendar expired in 2012, to prepare us for a new age dawning in 2018.

Use of the “The Leviathan” picture permitted by Jeff Chang. Check out the rest of his work athttp://jeffchangart.deviantart.com.

There is evidence that suggests we experienced 20th century alien contact. In 1942, the Battle of Los Angeles involved the US military and Air Defense allegedly fighting a UFO.

WWII Allied Air Force planes were buzzed by balls of light that some think could have been extraterrestrial. And the alleged crash of a flying saucer in Roswell, New Mexico in 1947 propelled the world into the age of UFOs. For decades, some people have been searching for the sounds of extraterrestrial intelligence, while others have been sending messages out into deep space. What would happen if aliens answered… or came calling?

What protocols exist to determine who would speak on behalf of mankind, and how might we communicate?

What happens if they return? Some believe they already have.

It may sound like a strange movie sequel, but a Bosnian archaeologist with a penchant for dressing like Indiana Jones has discovered a giant stone sphere he believes proves the existence of a lost civilization.

Archaeologist Dr. Sam Osmanagich discovered the stone in the Podunavlje Forest in mid-March and believes it may be the largest stone ball in the world.

So far, less than half of the ball has been uncovered, but Osmanagich estimates its radius to measure between 1.2 and 1.5 meters (3.9 – 4.9ft)

With a very high iron content, preliminary tests suggest the huge ball could weigh more than 30 tons (60,000lb), which would make it the biggest stone sphere in Europe.

If it turns out to be even heavier, it could surpass similar discoveries in Costa Rica (which are believed to be man made) and in Mexico (deemed natural formations) to be declared the biggest stone ball in the world.

Osmanagich says when the research is complete, the discovery could prove that Southern Europe was home to advanced civilizations from the “distant past” who had their own form of “high technology”.

Osmanagich has previously claimed that a series of hills in central Bosnia and Herzegovina actually contain ancient pyramids and tunnels underground. He says that the huge sphere could back up this theory by providing further evidence of an ancient highly developed civilization.

However, Osmanagich’s claims about the stone are disputed by fellow archeologists who have a different – and more natural – explanation for the large stone.

Mandy Edwards of the University of Manchester’s School of Earth, Atmospheric and Environmental Sciences told theMailOnline the rock is likely a result of ‘concretion’, formed by the “precipitation of natural mineral cement within the spaces between sediment grains“.

“There is some genuine archaeology on the hill and I’m told it’s medieval, possibly Bronze Age or Roman”, said Anthony Harding, president of the European Association of Archaeologists, to The Telegraph.

“But the speculation that there could be a 12,000-year-old structure beneath is a complete fantasy and anyone with basic knowledge of archaeology or history should recognise that,” he added.

Reports of encounters with strange beings and sightings of mysterious objects in the sky have occurred throughout history. A 13th century historical book, Otia Imperialia, includes an account of a creature descending from a flying craft over Bristol, England.

The log from Christopher Columbus’ first voyage to America contains a report of strange lights in the sky.

Medieval art pieces depict disc-shaped objects floating in the heavens. Sightings of flying cigar-shaped crafts were reported during the Black Plague. And there were even discussions of extraterrestrial life among America’s Founding Fathers.

Could these sightings, coming from every part of the world, from biblical times to present day, be evidence that aliens have been with us all along?